The desert is our specialty

Desierto Verde Expediciones Tour Operador  carries out the vast majority of its operations within the northern zone of Chile. This mainly because we have expert guides with vast experience, also because our operations center is located in the city of Iquique and logistics are developed more efficiently for the three main tourist attractions. 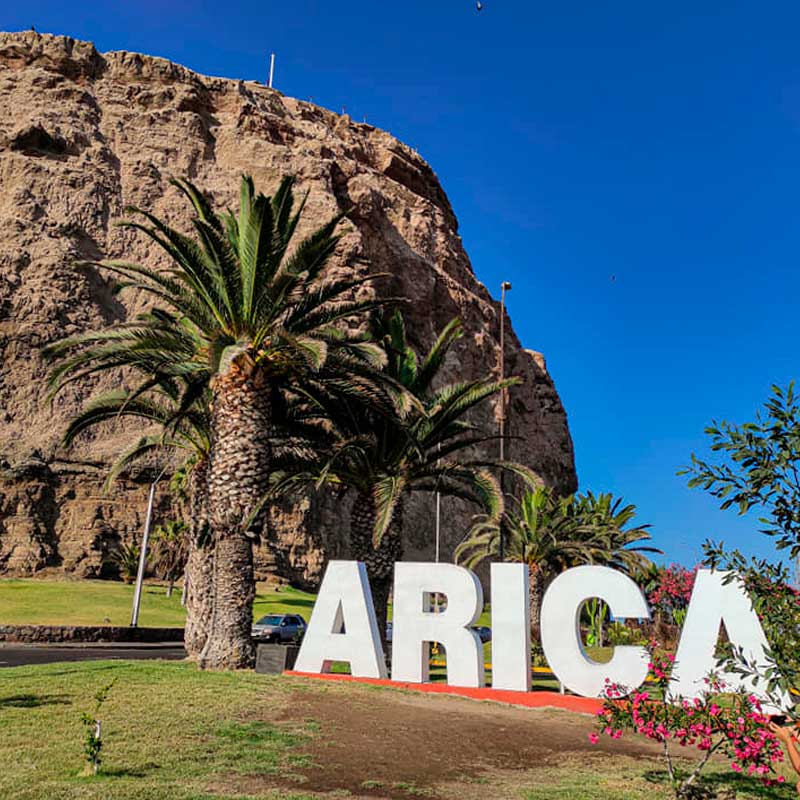 Known as “the city of eternal spring” for its pleasant climate, it is the capital of the province of Arica & Parinacota, on the border with Peru and Bolivia. Countries with which the city of Arica has an important commercial activity, especially with the city of Tacna, Peru. Although it is located on the coast, it is the starting point to visit the Geoglyphs of the Lluta and Azapa valleys, the high plateau with its natural sanctuary, the Lauca National Park, where we connect with Lake Chungará and its ecosystem, the Andean towns of Putre and Parinacota, Las Vicuñas National Reserve and the Salar de Surire natural sanctuary. In turn, the city of Arica has beautiful beaches and green areas, and is a short drive from the archaeological museum San Miguel of Azapa Valley, which contains archaeological samples such as the chinchorro mummies with more than 10,000 years of history.

PLACES OF TOURIST INTEREST IN ARICA:

Azapa Valley:  Place of cultivation centers such as the famous Azapa olive, and important archaeological remains such as geoglyphs and the oldest mummies in the world, belonging to the Chinchorro culture.

Lluta Valley:   Place of geoglyphs from the prehistoric era, vestiges of ancestral cultures such as rock art routes. Typical towns like Poconchile. Lluta is the gateway to connect with Lake Chungara and Lauca National Park (declared a World Biosphere Reserve by UNESCO. Along with the Las Vicuñas National Reserve and the Salar de Surire). Natural sanctuaries with more than 130 species of birds, as well as fauna such as vizcachas, llamas, alpacas, vicuñas and much more. In addition to incredible landscapes surrounded by volcanoes such as Parinacota, Pomerape and Guallatire.

Parinacota:  Andean town located above 4,000 meters above sea level. of Andean-colonial architecture. Its population is about 25 people of Aymara ethnicity. It is a textile and artisan town, highlights its Church of 1789.

Putre:  Andean town located at 3,500 meters above sea level, mainly Aymara town to which the modernism of tourist services has arrived, such as quality restaurants and excellent accommodations. Positive ascent station towards Lake Chungará to acclimatize to the altitude and eat a typical Aymara dish.

Surire Salt flat:  Declared a natural monument in 1983. Saline lake of 17,500 hectares, whose name derives from the “Suri” or ñandú, which is a highland bird in this area. Its diverse fauna includes camelids, the caití, the juarjua duck, the Andean cat, the fox and three species of flamingos. Its landscape also stands out for the Liscaya, Arintica and Chiguano snow-capped mountains. As well as benefits for visitors such as the famous “Polloquere Hot springs“.

Excursion to the Codpa Oasis

Excursion to an Oasis in the middle of the desert, in the Arica and Parinacota region.

Enjoy nature in the heights of the northern altiplano, the Parinacota volcano and the Chungará Lake.

Tour of Beaches and Caves

We invite you to visit the coastal edge of the city of Arica, one of the most attractive in the Norte Grande.

In to the Valleys, Archaeological and Cultural

Archaeological tour with ancestral mummies and geoglyphs in the middle of 2 magical valleys. 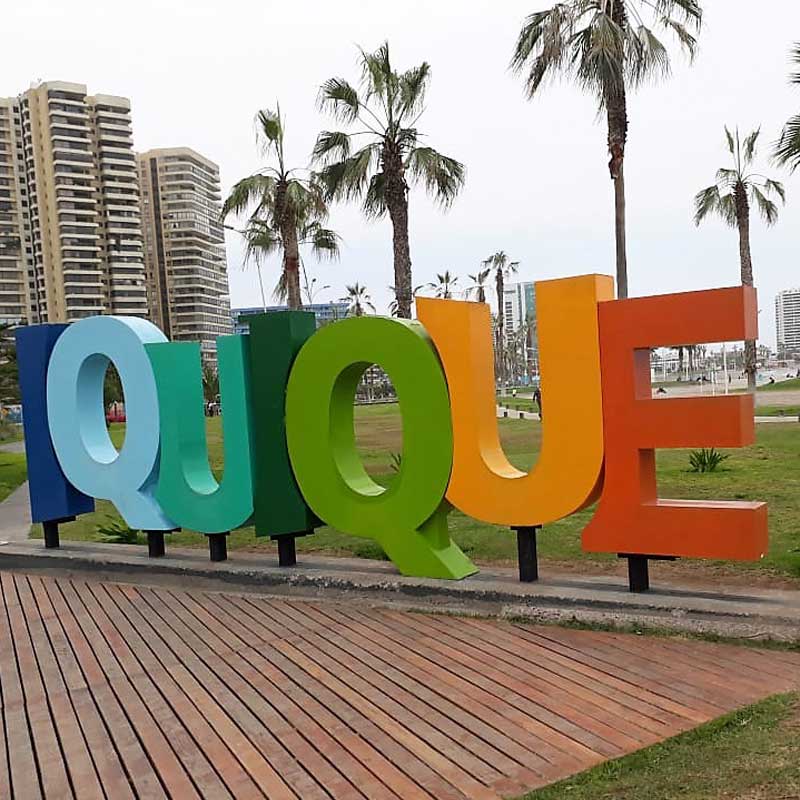 Known as the “Land of Champions“, which thanks to the exploitation and boom of the nitrate industry, became an important international port in the 19th century. The golden age of Nitrate, whose wealth has been reflected in buildings in the same city, such as the Astoreca Palace and Baquedano boulevard, the former Customs House, the Clock Tower of Plaza Prat, the Spanish Casino and the Municipal Theater, each with impressive architecture. and different from each other. It was also the place where the famous and historical “Iquique Naval Combat” took place, one of the most emblematic battles of the War of the Pacific (1879 – 1883), which faced the countries of Chile, Peru and Bolivia. Its main economic activities are mining, the fishing industry and tourism, in addition to having been declared a duty-free or duty-free zone for commerce, whose emblem is the ZOFRI Mall. City of beautiful beaches very visited by tourists during the Summer, Iquique is the capital of the Tarapacá Region.

PLACES OF TOURIST INTEREST IN IQUIQUE:

Pintados Geoglyphs:  It is the largest concentration of Rock Art in the world in one place. More than 350 figures of geometric, zoomorphic and anthropomorphic structures, located on the slopes of the hills of the Coastal Range, distributed in panels of 66 thematic groups. They extend for 4 km, covering 50,000 square meters of slopes.

Giant of Atacama:  Geoglyph located on the 86-meter high Cerro Unita, the largest in the world in human figure. It represents a deity or shaman, with his feathered headdress and feline mask. Its data is calculated between 900 to 1,400 years ago.

Ex-Nitrate of Humberstone and Santa Laura:  Declared a World Heritage Site by UNESCO, they are located 50 km from Iquique. They are site museums and shows of the golden age of the Saltpeter that was exploited and transferred to Europe and the USA in ships, during the second half of the 19th century and the first half of the 20th century. In Humberstone you can discover the way of life of the time, with its imposing theater, its school, square and grocery store, in Santa Laura you can see how saltpeter was made through its industrial plant.

Pisagua:  Historic coastal town, it was the third most important saltpeter port. Their houses are a sample of the golden age of the Saltpeter. Its Clock Tower, Municipal Theater and its colonies of sea lions stand out. Place of the first maritime landing of modern times in a warlike conflict, during the War of the Pacific.

Pica Oasis: Oasis located in the desert, in the middle of a sea of sand. With thermal baths and tropical fruits such as mangoes, guavas, tangerines, grapefruits, oranges and the famous Pica lemon, used in the preparation of Pisco Sour. Place of historical wineries that were wine industries in the 18th century and the nitrate period.

Isluga Volcano National Park:  Natural sanctuary of 174,744 hectares, located at 3,800 meters above sea level, where highland flora and fauna can be appreciated. In it, the Isluga volcano stands out, which can be seen from the ceremonial town of the same name, which has a beautiful white church painted with lime. In the Park there is also the Andean town of Enquelga, which brings together an Andean community in its 90 houses where it is possible to buy handicrafts and learn about their Aymara culture. Habitat of diverse fauna and highland flora, ecosystem of its wetlands and exquisite hot springs in the middle of nature.

Huasco Salt Flat National Park:  Nature Sanctuary, located at 3,778 meters above sea level. It is an area of large wetlands, which is why it is included in the Ramsar List of Sites of International Importance. Home to a great variety of native fauna such as flamingos and vicuñas, it is a beautiful landscape surrounded by peaks that exceed 5,000 meters in altitude.

Ecotourism and picnic excursion in the middle of the highland nature.

Discover the enigmatic hidden blood-colored lagoon in the highlands, with its ancestral and mythological history.

Historical tour through the city of Iquique, visiting its old town full of history.

You will discover the charms and traditions of the northern Chilean plateau, crossing geysers and natural hot springs. 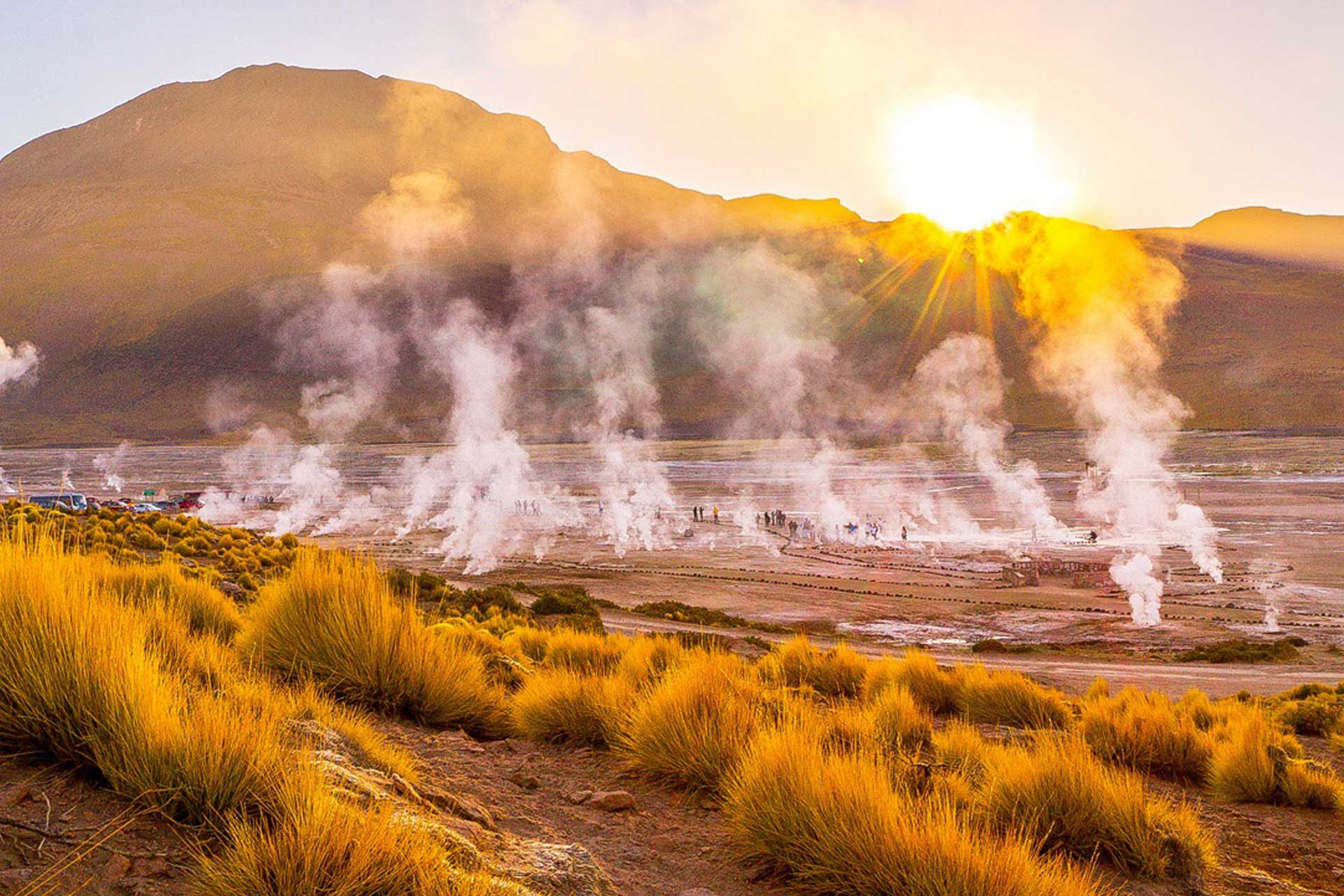 Located on the shores of the Atacama Salt Flat. The town is built in materials such as adobe and cacti from the area, its dirt streets give it a rustic and artisanal atmosphere. With strong Inca influences, San Pedro is an archaeological center where the Padre Le Paige Museum is located, named in honor of the Belgian priest who dedicated much of his life to exploring the desert. The museum contains mummies, tools, and religious artifacts from indigenous peoples. Surrounded by diverse reserves and natural sanctuaries, exotic geography and Andean towns.

Atacama Salt Flat:  The largest salt flat in Chile, with 100 km long and 300,000 hectares. It has 40% of the world’s lithium reserves. Habitat of diversity of birds, among which there are 3 types of flamingos.

Moon Valley: Site with special and unique geographical formations, in the Salt Range, which is best appreciated at sunset with its special color. It is part of the Los Flamencos National Reserve.

Tatio Geysers:  Geothermal area located at 4,321 meters high, where at dawn you can see spectacular steam columns up to 7 meters high emerging from underground.

Miscanti and Miñiques Lagoons:  They are located in the Los Flamencos National Reserve, with an intense blue color they are found under the hills of the same name. Habitat of a large number of Andean birds.

Trekking Tour to The Hot Springs of Puripobre

Live the experience of an astronomical tour in the desert, admiring the cleanest skies on the planet.
See More

Incredible excursion and experience through a nature route and natural settings full of mysticism.
See More